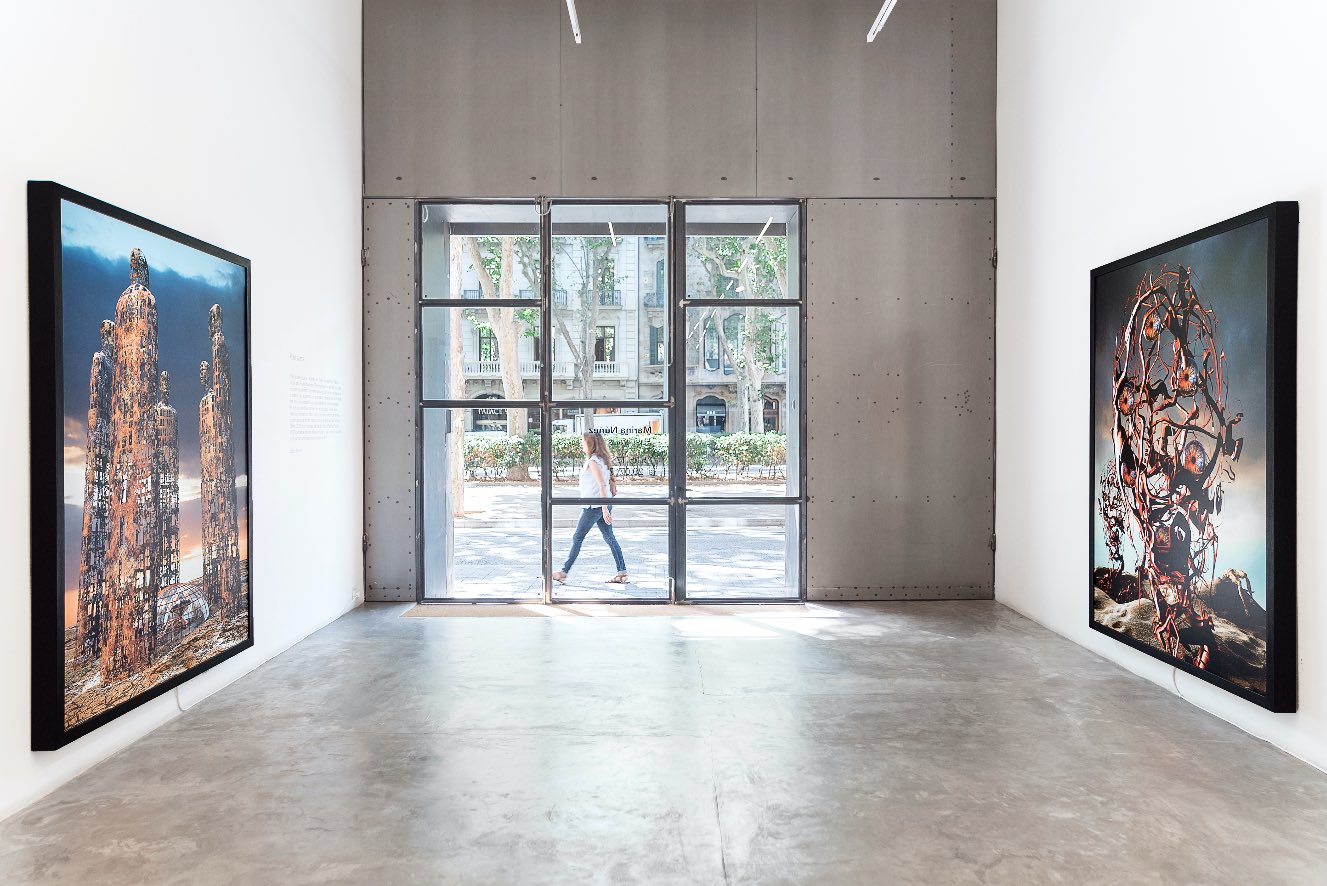 Post signals a time after; trans points us to the other side. The terms ‘posthumanism’ and ‘transhumanism’ are widely used at present. They may appear to be opposites but in fact they refer to same thing: an overcoming of the human condition as it has been conceived until now. This exhibition shifts between the generic in both prefixes against a backdrop of the human body and its identity, evoking a ‘post’ future while alluding to a breach of ‘trans’ limits. This is seen in the two-part video series Ofelia (2015) and in Sin título (Ciencia Ficción) (2007), two paintings executed on synthetic skins that evoke skins of human faces with no inner organs.

Marina Núñez’s work reveals a conceptual constant: her interest in the monstrous and in non-canonical characters, but it has also drawn on an array of artistic resources that have taken her from the oil paintings of her early career to more recent experimentation with advanced digital technology. This evolution has allowed her to discover technical resources that are more suited to expressing one of her mottos: “if the body mutates, identity mutates”; “if the body changes, subjectivity changes” too. This is why the substrate of her work has progressively altered to reflect her fascination for the literary genres of science fiction and terror, in particular Edgar Allan Poe, and the figure of the cyborg, a being that is neither totally human nor totally machine, or in other words, a “hybrid; impure, having no immutable essence”, echoing cyberfeminist writer Donna Harraway’s theories as expressed in Cyborg Manifesto (1985), an important point of reference in her work. Marina Núñez’s artistic project looks to literature, essay, film and currently television series, but also to art history, although references to the latter are more veiled now. Behind the visual results obtained ostensibly from 3D technology we do find clear references to the Baroque, as in the case of Sin título (Monstruas) (2011), digital pictures showing female faces being blown off by a violent surge of wind, which are reminiscent of the thinly draped marble figure of Modesty in the Cappella Sansevero in Naples.

Eyeless faces contrast with the many pieces in which eyes are the absolute protagonist: eyes without faces that observe, that pursue, the viewer; that are transformed, the pupils subdividing into myriad pupils, as in Multiplicidad (2006); or are consumed, as the title of one of her videos, El fuego de la visión (2015), suggests.

After an exhibition at the Sala Alcalá31 in Madrid in 2015-2016, Marina Núñez made the following statement: “To integrate the ‘dark side’ allows us to intuit a more complete human being. Society hides monsters because they are scapegoats. Let’s embrace the messy, the unconscious and the pulsational”.To achieve this she proposes allowing “another subjectivity, another sensitivity, another experience, to arise from that which was discarded and buried until now, so that other, less rigid and brutal ways of being and living can emerge”.